Picture of the Month 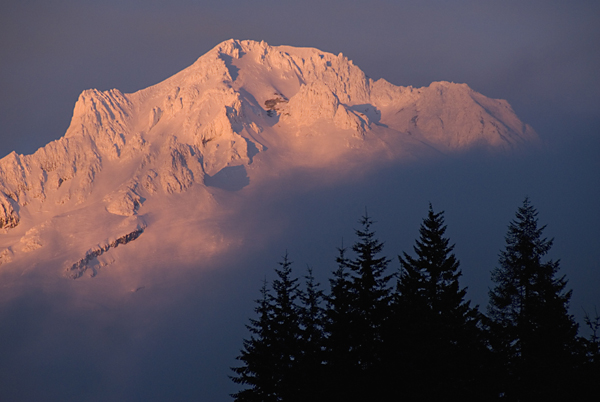 I was on a family ski trip to Mt. Hood, but that didn't prevent me from sneaking out one afternoon to try and take a few pictures during a stretch of extraordinarily clear winter weather.  I had taken dozens of pictures from this vantage point before some fog began to roll in over the pass : then, I had just a few seconds before the scene was obliterated by clouds.  But in those few moments I got this - the best shot of the day.

PHOTO TOURS 2008:  Kevin will only be leading two photo expeditions this coming year.  First will be with Lindblad Expeditions and National Geographic to Greenland in September : see here for more information.

In late October, Kevin will be aboard the National Geographic Endeavour on a voyage to magical South Georgia Island.  With a full week on South Georgia and three days in the Falklands, it will be a trip not to be missed.  Joining Kevin on board will be photographer Flip Nicklin, writer Kim Heacox and Photo Expedition leaders Jack and Rikki Swenson.  For more information, go here ---  or contact me with questions.

To see some of Kevin's previous photos of South Georgia, visit here.

Review a previous Picture of the Month:

Search for images at kevinschafer.com/catalog